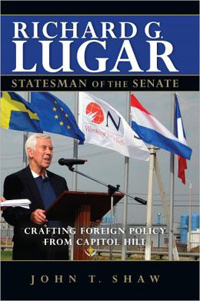 Two-time chairman of the Senate Foreign Relations Committee, Richard G. Lugar was one of the most widely respected foreign policy experts in Congress for more than three decades. In this illuminating study, John T. Shaw examines Lugar's approach to lawmaking and diplomacy, revealing the inner workings of the Senate. Drawing on interviews with Lugar and other leading figures in foreign policy, Shaw chronicles Lugar's historic work on nuclear proliferation, arms control, energy, and global food issues, highlighting the senator's ability to influence American foreign policy in consequential ways. The book presents Lugar's career as an example of the role Congress can play in the shaping of foreign policy and it demonstrates the importance of statesmanship in contemporary American political life.

"John Shaw deploys his reportorial skills to excellent effect... The result is a trenchant study of statesmanship as practiced from the legislative branch of our government."
—Strobe Talbott, president, Brookings Institution

"This book takes us on a fascinating journey through the political life of a giant in American foreign policy... An impressive account of Richard Lugar's rich political work and versatile political persona."
—Jan Eliasson, former president of the UN General Assembly, former Swedish foreign minister, and former Swedish ambassador to the United States

"Rewarding reading... Even non-wonks and Senate-haters will find Shaw's book easy going. Those who like public policy, want a closer look at the inner workings of the Senate, or know something of Senator Lugar, will love it."
—Bill Frenzel, former Republican congressman, guest scholar at the Brookings Institution

"A significant piece of reporting, description and analysis that will be useful as a case study for legislative and American foreign policy scholars."
—David Hadley, professor, Wabash College

"In this well-researched account, Shaw offers an admiring record of the work of Sen. Richard Lugar, two-time chairman of the Senate Foreign Relations Committee, focusing on how he has influenced foreign policy. ...Shaw focuses on the senator's interests and actions during his three decades in the Senate, ranging from the Nunn-Lugar program to control nuclear weapons to his interest in agriculture and America's role in ending the global food crisis. Attention is also given to Lugar as a truly bipartisan politician; while a lifelong and loyal Republican, he has worked with Democrats throughout his career, including such liberals as Barack Obama, and has famously argued with hard-line Republicans like Jesse Helms on matters of foreign policy. Shaw was granted five years of special access to Lugar and his work, and the admiration the author has is palpable, although not so much that it clouds the work. ...Shaw gives a convincing description of Lugar's 'considerable legislative legacy.'"
—Publishers Weekly

Interviews and Appearances about Senator Lugar 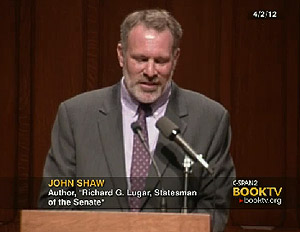 John was interviewed on Lugar's primary battle in the Huffington Post. 5/7/12
"It seems to me like he had two strategic options," said John T. Shaw, a congressional correspondent for Market News International and a longtime Lugar watcher. "One was to run as a real hard right Republican, at least in the primary, or the other was he could just run as who he is and say, 'Look, I'm a loyal Republican, but I work with Democrats when I have to to solve big problems.' "

Washington Post Political Bookworm Guest Blog. 12/13/11
"Lugar battles to hold on to Senate seat in face of Tea Party candidate's attack on his bipartisanship" by John T. Shaw "Richard G. Lugar (R-Ind.), one of the last remaining statesmen in the U.S. Senate, is fighting for his political life. For 35 years, Lugar has worked with presidents and lawmakers from both parties to solve difficult problems. In the realm of foreign policy, the two-time chairman of the Senate Foreign Relations Committee has achieved historic accomplishments in promoting arms control, containing nuclear proliferation, advancing international law, championing sound energy programs and confronting the global food crisis. The Republican senator has been a revered political figure in Indiana for more than three decades; in his last election he ran unopposed for a sixth term and secured more than 85 percent of the vote. It was his fourth consecutive victory by a two-thirds majority. Now Lugar is under attack from the Tea Party wing of the Republican Party and is scrambling frantically to survive a tough GOP Senate primary next spring."

John's writings and speaking engagements are discussed in The Diplomatic Pouch. 6/12
"When Washington Diplomat correspondent John Shaw began researching his book about Lugar in the fall of 2006, the idea that the senator would lose the seat he's held for 35 years was not even in the cards. In "Richard G. Lugar: Statesman of the Senate," Shaw chronicled Lugar's globally respected work to advance arms control, nonproliferation, effective and humane global food policies, and international law.
But as the release of his book neared in the spring of 2012, Shaw was struggling to understand and explain why one of the most respected American lawmakers in the last quarter of a century was scrambling for his political life."