"It is sure to be a classic in Kennedy scholarship
and American presidential history."
—Amy Zegart, Stanford University professor and Hoover Institution fellow

JFK IN THE SENATE:

Pathway to the Presidency 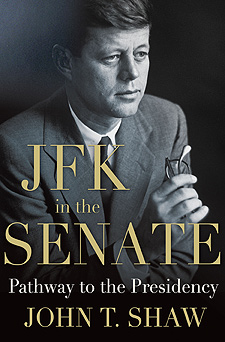 Before John F. Kennedy became the charismatic 35th president of the United States and an enduring American icon, he served for nearly eight years as the junior senator from Massachusetts. From 1953 to 1960, he mastered the nuances of American politics and carefully charted a path to realize his presidential ambitions. "In all my life, I never saw anybody grow the way Jack did," said House Speaker Tip O'Neill of Kennedy's Senate years.

In the first book to focus on his tenure as a senator, JFK in the Senate shows how Kennedy used the upper chamber as a policy and political training ground. Join me as I explore Kennedy's role in some of the most important domestic and international challenges of that era, including the threat posed by the Soviet Union and China, France's faltering military interventions in Vietnam and Algeria, and the battle to reform the labor movement.

Unlike Lyndon Johnson, the Senate Democratic leader, JFK never aspired to be a dealmaker who kept the institution under his control. Instead, he envisioned himself as a historian-statesman in the mold of his hero, Winston Churchill, moving easily between the worlds of ideas and action. Drawing on archival research, memoirs, and interviews with congressional experts and former Kennedy aides, JFK in the Senate provides fresh insights into this overlooked period of Kennedy's remarkable political career.

"JFK in the Senate is a balanced, lively and absorbing account of John F. Kennedy's political evolution within the context of the 1950s Senate. This book clarifies and deepens our understanding of an endlessly fascinating American leader. Shaw is in control of his material, has an easy flowing style and a good eye for apt quotations and amusing stories."
—Richard Baker, Senate Historian Emeritus and co-author of The American Senate

"John F. Kennedy's Senate career is the most important, overlooked chapter in JFK's storied political life. Shaw has delivered a masterful corrective. Mining newly available archival materials, JFK in the Senate offers a riveting and revealing account of Kennedy's transformation from unremarkable freshman congressman to dynamic presidential contender. It is sure to be a classic in Kennedy scholarship and American presidential history."
—Amy Zegart, Stanford University professor and Hoover Institution fellow

"Like most Americans, I usually think of John F. Kennedy as an inspiring young president. But we sometimes forget that before he was elected in 1960 he had served for eight interesting and consequential years as the junior senator from Massachusetts. We learn in this book that JFK entered the Senate as an uncertain backbencher and grew into a formidable presidential candidate and compelling American statesman. Shaw gives us a vivid, memorable account of how this transformation occurred."
—Former Senate Majority Leader Tom Daschle

"Hundreds of books have been written about JFK, but John Shaw is the first to take such an exclusive look at Kennedy's Senate years. JFK in the Senate provides new insight into an eight-year career that led to the presidency. Though many of us have tried, only Warren Harding, John Kennedy and Barack Obama made the jump straight from the Senate to the White House. In this book, we learn how Kennedy prepared for the 1960 campaign and the presidency, and how he studied the great leaders of the Senate to hone his own leadership vision."
—Former Senate Foreign Relations Committee Chairman Richard Lugar

"President Kennedy was and continues to be an inspiration to millions of Americans. John Shaw provides a captivating account of Kennedy's often overlooked formative years in the Senate. A fascinating read."
—Senator Robert Casey of Pennsylvania

"John Shaw has thoughtfully and fully examined a period of John F. Kennedy's career that has been too often glossed over. By illuminating Senator Kennedy's distinctive contributions in both domestic and foreign policy, Shaw effectively refutes the cliché that Kennedy was an inconsequential senator."
—Ira Shapiro, author of The Last Great Senate: Courage and Statesmanship in Times of Crisis

"Relying on archives, memoirs, and interviews with key players, Shaw makes a convincing case for the importance of J.F.K.'s Senate years. ...Shaw's account deftly balances anecdote and analysis, making this a valuable read for those interested in both J.F.K. the pol and J.F.K. the person."
—Publishers Weekly