Check back for more events.


The Southern Illinoisan, 12/1/18
John Shaw, director of the Paul Simon Public Policy Institute at SIU Carbondale, is developing a new Statesmanship Initiative for the university.

Resurrecting the Past, 4/19/18
A discussion of the perils and possibilities of trying to resurrect the past, drawing from John's 25 years as a Washington, D.C.-based journalist and historian. 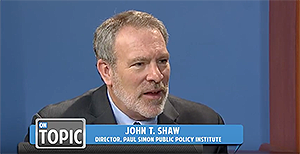 American Public Television's documentary This is the House that Jack Built, 10/17

Gaia Leadership Sweden—Reflections on the U.S. Elections, 11/14/16
Gaia Leadership's Claes Thorson had a conversation with experienced journalist John Shaw of Market News in Washington, D.C., about what can be expected of the Trump presidency.

C-SPAN—Budget Deficit Reduction, 10/23/15
John Shaw talked about the budget reconciliation bill being debated in the House, as well upcoming votes on raising the debt ceiling prior to the November 3, 2015, deadline.

C-SPAN—Republican Fiscal Year 2016 Budget Plans, 4/24/15
John Shaw on the House and Senate budget resolutions being debated in Congress that week. 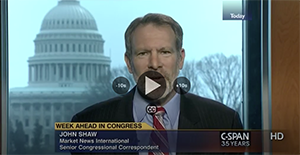 C-SPAN—Congressional Legislative Agenda (5 min) 12/12/13
John Shaw interviewed about the congressional agenda before recessing for the year. Topics include the agreement reached by the Budget Conference Committee chairs and the farm bill.

C-SPAN—This Week in Congress (6 min) 11/12/13
John Shaw previewed the House and Senate agendas for the week.

C-SPAN—JFK in the Senate, 11/7/13
John Shaw talks about his book, JFK in the Senate: Pathway to the Presidency. In the book he recounts John F. Kennedy's as the junior senator from Massachusetts from 1953 to 1960. Mr. Shaw was introduced by former Senator Richard Lugar, who added historical context. This Lugar Diplomacy Institute book launch event was held at the German Marshall Fund in Washington, DC. 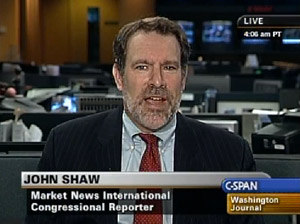 C-SPAN—Congressional Legislative Schedule (3 min) 9/7/12
John Shaw spoke via Skype about what Congress will likely accomplish in the two month period before the November election.

C-SPAN—Status of the Continuing Resolution (4 min) 2/16/11
John Shaw was interviewed by phone on the status of the House continuing resolution.

C-SPAN's Newsmakers: Obama Administration Spending Priorities (30 min) 5/8/09
Christina Romer, chair of the White House Council of Economic Advisers, talked by remote video about the Obama administration's spending priorities and efforts to set the U.S. economy on an even course—including stress tests administered to the nation's largest banks, the $3.4 trillion budget and congressional reaction to it, and war funding. After the interview, the reporters discussed her responses with the host.

C-SPAN's The Washington Journal (52 min) 3/30/09
Telephone lines were open for comments on the government forcing General Motors CEO Rick Wagoner to resign. Throughout the program John Shaw talked about the Obama Administration's proposed fiscal year 2010 budget, congressional Democrats reaction to it, and the Republican budget alternative. He also discussed expected congressional action on the budget in the upcoming week.

C-SPAN—Omnibus Spending Debate (3 min) 3/3/09
John Shaw spoke about the congressional debate over fiscal year 2009 spending measures and the inclusion of earmarks in the bill. 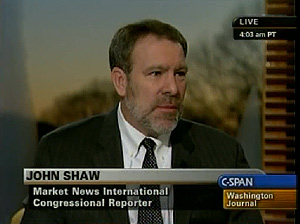