Inside the Life of a Working Diplomat 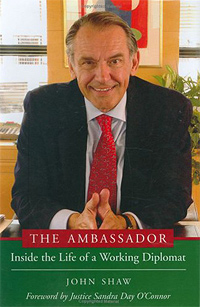 Using the life and work of one of the world's most accomplished diplomats, Sweden's Jan Eliasson, this provocative book shows how diplomacy influences global political debates and international relations. Ambassador Eliasson provided John Shaw with unusual access to his work during his final years in Washington as an ambassador. Shaw attended policy meetings with the Ambassador, watched him give speeches, host high-level receptions, and interact with other senior diplomats. Using Eliasson as the vehicle, The Ambassador offers a behind-the-scenes perspective of modern diplomacy. After leaving Washington, Eliasson served as the president of United Nations General Assembly, Sweden's foreign minister, the UN's special envoy for Darfur and is now the Deputy Secretary-General of the United Nations.

"John Shaw's compelling account of one of the world's most remarkable super-diplomats is important for all students of international relations. This study of Swedish Ambassador Jan Eliasson's activities and initiatives in Washington reveal both the complexities and personalities that drive the policies of nations in the world today."
—Richard Lugar, chairman of the Senate Foreign Relations Committee

"Students of diplomacy will find this book an enticing portrait of a world-class ambassador."
—Richard Solomon, former U.S. ambassador, president of the United States Institute of Peace

"More than a vivid, highly readable account of a master-diplomat, this book is also a highly persuasive argument for the critical role the ambassador can play in the 21st century."
—Strobe Talbott, president of the Brookings Institution

"A compelling profile of an exceptionally gifted diplomat, The Ambassador provides a rich, insightful and dynamic portrait of modern diplomacy itself."
—Diane Orentlicher, professor of International Law, Washington College of Law, American University

"Any newly nominated ambassador to Washington should have John Shaw's in-depth profile of what it takes to succeed in the world's political capital."
—Chester Crocker, professor of diplomacy, Georgetown University

"The Ambassador should be obligatory reading for anyone interested in learning what makes some ambassadors influential and others irrelevant. John Shaw has written a fascinating account of the strategy, tactics, and tools that an ambassador from a small country can employ to successfully compete in the big leagues of Washington diplomacy."
—Moises Naim, editor-in-chief, Foreign Policy

"One of the sharpest observers of Washington's diplomatic scene, John Shaw provides a lively, thought-provoking revelation of what it takes today to be a successful ambassador."
—Walter Cutler, former U.S. ambassador, president of Meridian International