“Rising Star, Setting Sun is a riveting account.”
—David Mayers, author of America and the Postwar World
“...vividly portrays the generational clash between the
upstart former lieutenant and the iconic general.”
—Richard Cohen, Chief Author of The Almanac of American Politics
“...provides fascinating behind-the-scenes detail of this iconic
event while exploring the broader context of a nation in evolution.”
—Betty K. Koed, Historian
“...a brilliant job of capturing the hidden tensions during
the transition from Eisenhower to Kennedy.”
—Larry J. Sabato, author of The Kennedy Half-Century 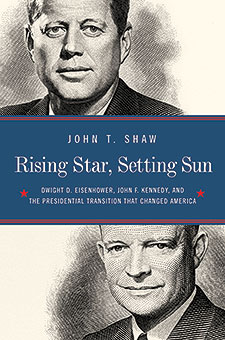 The exchange of leadership between the thirty-fourth and thirty-fifth presidents of the United States marked more than a succession of leaders. It symbolized—and triggered—a generational shift in American politics, policy, and culture.

Read more about the book here